The Chevy Silverado has been doing heavy-duty work since 1998, and it’s one of the classics. But like any classic line of the vehicle, they can run into problems in different model years. That’s what this guide is for, to help you get an idea of the landscape for the Silverado, and where you can find the best value on a reliable truck model year that won’t break down.

Just like our other articles about the years to avoid, remembering that these are focused on drivers who think very carefully about the problems and issues their trucks face. Remember that many drivers will almost never encounter many of the problems below, but if you’re in the market for a used Silverado, it’s a good idea to use this article as a checklist before buying one.

Since its introduction in 1998, the Chevy Silverado has consistently been one of the most sold trucks in the US, valued for its reliability and durability as a heavy-duty pickup truck. Mechanically identical to the GMC Sierra, this truck was an evolution of the Chevy C/K line and continues to innovate in the truck world. There are three different models in the line:

The 2500 and 3500 are the heavy-duty models that are more than capable of towing and hauling heavy loads, but their gas mileage is not ideal for commuting.

Comparisons with the Ford F-150

The Silverado and the F-150 have a history as rivaling trucks. Depending on which year you look at, the F-150 will generally edge out the Silverado in both price and engine capability. However, the Silverado ranks consistently higher in reported reliability. Generally, the two trucks are considered comparable, so it’s going to come down to two things when you’re working through which one to purchase: 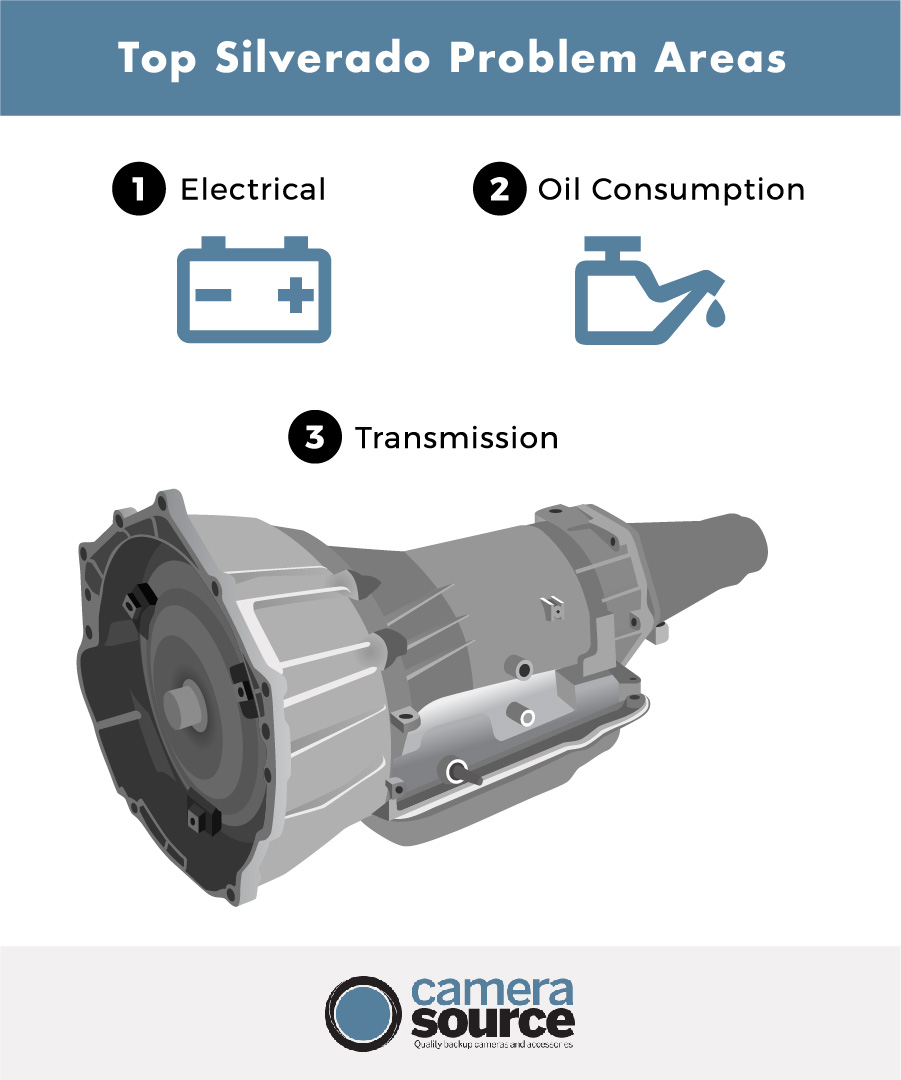 The Chevy Silverado has a usual list of problems for every model year, like most trucks. Engineering creates an ever-moving and consistently difficult series of problems, and even reliable models like the Silverado can run into trouble. Here are the common Silverado problems:

Hard shifts, clunking, and slow acceleration are some of the most common complaints, which are frequently credited to a faulty torque converter. Problems with the transmission aren’t just a hassle to deal with on the road, they can be the most expensive to fix. A lawsuit has even been filed against GM by car owners for the troubles this caused for their wallets and the drivability of the truck.

Excessive oil consumption is a common complaint for the Silverado. Owners report losing up to 3-4 quarts between oil changes, or needing an oil change every 1,000 miles. This may seem like a relatively minor problem, but the expense can really add up over time.

Some drivers report problems with engine knocking, which is where air and fuel combust outside of the normal combustion front. This can be a serious issue that can severely damage a vehicle.

Going over 100,000 miles on any vehicle can be a turning point for problems and issues, and the Silverado usually has a lifespan of between 100,000-130,000 miles. The problems stated above commonly began appearing under the 100,00 mile mark. This Silverado is a reliable truck, but it can be high-maintenance for some owners.

Below is a list of Chevy Silverado model years with reported issues that are important for a discerning consumer to be aware of.

With 14 recalls, reported issues with rusty brakes, and steering column issues, this model is one to be cautious of. The transmission is also known to have problems, although less frequently than other issues.

The 2007 model was reliable, with few recalls-- only 4--but had engine problems, excessive oil consumption, and transmission issues. These could cost $3,500+ to fix.

Only 2 recalls, but once again there are excessive oil consumption issues with this model, as well as 4-wheel-drive issues that impacted its utility.

This year starts with some serious recalls--19! Drivers also reported issues with power steering and electrical. It’s one thing if the power windows don’t work, but another if the steering fails.

A big year for recalls, adding up to a grand total of 20. Also, the 2015 model is known to have transmission and suspension issues which can cost more than $5,000 to fix.

Fewer recalls this year, totaling 10. Drivers had issues with the brakes and the engine, no one wants to drive a truck that has trouble going and stopping.

With the bad, you can take along with it the good. Here are a few Chevy Silverados that are considered to be the best in the line.

The 2012 Silverado model year is largely recognized as one of the most reliable trucks in the line, with only 2 recalls, and is regarded as a standout in what may have been some regrettable years for the model.

These years have seen the Silverado perform admirably, and many critics say that both of these models have gotten the line back on track.

Silverado: A Great Truck to Own

A well-maintained Chevy Silverado can deliver 200,000+ miles to its owner, as long as it's well cared for and kept in working shape. While some of the models are known to have recalls, excessive oil consumption, and transmission issues, most of these can be mitigated. Chevy has also made great strides with the line, and they get better and better year after year.